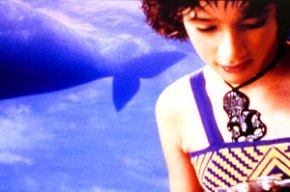 1. In the opening ten minutes of the film, the lead character narrates about a guardian’s disappointment in having a daughter, not a son who would carry on tradition. It allows for the audience to relate to the character; who’s parent’s haven’t set unreasonable expectations at one point or another? They initially show her as a child, a character that commonly shows vulnerability, and slowly creates the image of an underdog struggling to rise above the prejudices that keep her down. Paikea struggles to take her place as leader of the tribe, because of the patriarchal pillars formed deep with-in the tribe’s “roots” and heritage. Having a female chief wasn’t realistic, because females were seen as subservient to the males with-in the tribe. Paikea speaks out for every single girl in the world, because we have all faced prejudice and discrimination for being part of the female gender. The character is symbolic of every female in the world, because “She is never fully recognized as a human subject; either a Goddess, or a Whore, an animal who is only valuable because of her body parts that can give pleasure to men, procreate to continue the patriarchal kinship lineage.” (Hossain R., 2011) In the end, Paikea finds her will to survive and eventually thrives, fulfilling her destiny and giving hope to marginalized people everywhere. I think the female director/ female heroine/lead helped draw women toward the film, by making Paikea a more three dimensional character. (Alex)

2. “Strength does not come from physical capacity. It comes from an indomitable will.”
― Mahatma Gandhi

“Nothing can dim the light which shines from within.”
― Maya Angelou

The human shell, in all its beauty and imperfection can be as deceptive as it is unique; this is certainly the case for young Paikea. In Nikki Caro’s film Whale Rider, Paikea begins her journey in the film as an innocent soul born into unfortunate circumstance; she survives and her infant brother does not. From the very moment Paikea begins to connect with the world around her, she senses a deep-rooted resentment and disappointment from her koro (grandfather), “My koro wished in his heart that I’d never been born, but he changed his mind” (Whale Rider). Paikea internalizes this awareness and begins to realize how deeply her grandfather yearns for the traditional teachings and practices of their people; something as young girl, she can not deliver. As the film progresses we see Paikeas grandfather assimilate the local boys of the community in hopes of teaching them their cultural and spiritual traditions. Paikea senses this shift in the community and in her grandfather, when she is exposed to the traditional teachings of her people she is told rather firmly by her koro that there is no place for her in that world. The cultural limitations that are placed upon Paikea by her koro are quite evident in a particular scene-when Paikea is leading a chant with other boys she is immediately ordered by her koro to sit in the back or ordered to leave. Paikea continues to challenge gender expectations throughout the film by defying the limitations that are placed upon her both by her culture/people and her grandfather; she successfully does this by continuing to expose herself to the teachings and traditions of her people. Paikea’s determination is also quite evident within the film when her grandfather catches her after she has defeated a local boy Taiaha fighting – a traditional stick fighting method used by the Maori men. It is Paikea’s intrinsic strength and courageous spirit that leads to her unwillingness to bend and break under traditional and gender limitations. Paikea’s strength in mind and in spirit is frequently evident throughout the film as they are displayed through her actions; the retrieval of the reiputa, the speech/song she presents in dedication of her grandfather, the great source of power she manifests when saving the whale(s). The last scene of the film is a direct representation of Paikea’s internal strength and heroism. As Paikea descends on top of the whale she is able to manifest the power of her inherent spirit which leads to the representation of her ancestor Paikea’s historical journey.  Paikea also subtly subverts from traditional gendered ideals by appearing to be almost genderless in her physicality-which of course is untypical of most feminine heroines (we often begin to see more masculine tones and qualities appear). We begin to see Paikea not as a young girl, but as a young person who is driven by their need to gain acceptance and respect from her family and her people. I believe Caro’s film Whale Rider is a clear and unsuppressed statement of female empowerment, both in character depiction and strength of theme. Whale Rider is a film about a young girl who defies gender expectations by embracing her ancestry and cultural traditions, but not subverting to their oppressive limitations. Paikea’s character is able to harness an inner reserve of strength and boundless determination in order to overcome unfavorable odds and restore the belief of both her people and her grandfather, “I’m not a prophet, but I know that our people will keep going forward all together, with all of our strength”. (Whale Rider) (Sarah)

3. Niki Caro’s film Whale Rider is an evident example of ‘counter cinema’, “cinema that stands in opposition to the dominant forms of Hollywood” (P.P.) simply because it subverts from the stereotypical depiction of the female cinematic character. Paikea’s character in the film is an example of female heroism that is seldom displayed in mainstream cinema, this often because, “Hollywood films do not represent the real lives of most women in North America-they fail to represent real issues facing women today (complexities of life, hard-hitting subjects)” (Kord & Krimmer. 2005). In the film there is a strong element of female empowerment that is illustrated through characteristics, qualities and actions of Paikea. Paikea’s strong desire to subvert traditional gender expectations and her ability to conjure strength and bravery within a culture that does not recognize female heroism is what ultimately allows this film to be seen as counter cinematic, “In the past decade very important interventions have been made by female directors to represent the diverse experiences and narratives of women all over the globe.” (Hossain.2011) In the paper Hollywood Divas, Indie Queens, & TV Heroines Kord and Krimmer assert that, “The female characters who illuminate the screens of our movie houses not only reflect and perpetuate the status and options of women in today’s society, but also play an active part in creating new female role models” (Kord & Krimmer. 2005) this is true of Paikea’s character. Whale Rider is a film that strongly utilizes the female voice, or, the ‘female gaze’ which is to engage ideas of how women look or internalize popular culture, patriarchy, etc. The message of the film and journey of Paikea’s character and her people is not only audibly narrated by Paikea, but, it is also visually directed through her eyes. As an audience we are able to experience Paikea’s story through the young characters mind, or by the means of the ‘female gaze’.  We are able to experience Paikea’s feelings and emotions (pain, rejection, oppression, frustration, etc.) that are both authentic and pertinent to the characters inner-self and personal growth. Paikea is presented as a multi-dimensional female character that experiences multiple forms of oppression throughout this film which in turn is highlighted through the use of the ‘female gaze’. It is through this gaze that as a female auidence we are able to connect and relate to these issues of oppression because they are universal feelings that on some level resonate with all women. (Sarah)